So, what are halftones in oil painting exactly?

After I painted the grisaille (or ‘dead layer’) in the first chapter of this series, I was left with a cool grey, almost bluish skin tone because of the cooling effect white has over the raw umber imprimatura.

So now I need to consider the values (light and dark), the colour hues (what actual local colours I need for the skin tones), and what colour temperatures I want to use for the skin, i.e. whether to make those colours warmer or cooler.

The amount of warmness or coolness is also relative to the surrounding colour, so there’s a lot to think about.

But I think intuition also has a large part to play here. You kind of know when it looks right and when it doesn’t.

Ok so halftones are as the name suggests, are halfway in tone between the darks and the lights. They are found in the area where the light transitions around the form and disappears into the shadow areas.

They can be quite hazy or gradual; their edges can be very delicate and almost imperceptible. Unlike the shadows which can have definite edges, or the highlights which can be quite obvious and opaque.

So as rule of thumb, it’s best to scumble the halftones in cool with semi-transparent paint, use warm transparent glazes for the shadow areas, and use cool opaque and thicker paint for the highlights.

This is of course just a guideline; it’s always best to experiment and try your own thing too.

The halftones are important for making the skin look more realistic. Your paintings will end up looking pretty weird if your people are just warm pink, orange or brown.

A good artist knows when to employ subtle colour temperature changes and not exaggerate the changes in value so hectically.

Unless of course it’s your intent to do so.

What is colour temperature in oil painting?

When artists talk about colour temperature, it’s usually a bit more intuitively understood than when photographers compare the Kelvin settings for light.

If you use Photoshop, or Lightroom, you’ll probably know the higher the temperature in Kelvin, the warmer and yellower is the light, the lower the Kelvin number, the cooler and more blue is the light. Daylight is generally measured at about 5500K.

However, the Kelvin measurements of light actually works opposite in real life compared to the sliders in Photoshop or Lightroom, which are used to compensate colour temperature in order to find the white balance.

In reality, the warm orange glow of candle light is only at about 1900K, whereas a clear blue sky is over 9000K.

Anyway, we’re talking about painting here and not photography, so our ‘white balance’ can’t be adjusted with sliders and a grey card, but by being sensitive to the relative warmth or coolness of our pigments.

And by how pure or how greyed our chroma is, measuring with nothing but our eyes.

To be honest, I’ve never been so sure about this. I don’t think there should be anything. I don’t like ‘shoulds’.

Whenever painting, I think it’s always best to trust your own eyes anyway.

But generally speaking, if we are painting the figure in normal warm sunlight at 5500K for argument’s sake, then it helps to keep your deeper shadow areas quite warm (think of warm browns, reds and violets).

Keep your halftones emerging from the shadow areas quite cool with blue greys, olive (this is where the green verdaccio is so helpful) etc.

Keep your fleshy areas in the light, quite warm, and lastly, your highlights quite cool due to the use of much white which has a cooling effect on colour.

So as you can see, we have alternating colour temperature steps across the value range from shadows to highlights.

This is of course grossly simplified, there is a lot to say about colour ‘rules’.

And bear in mind that colour temperatures are always relative to each other.

If you consider blue, we are wont to think of it as quite cool. Yes, compared with violet, blue is a lot cooler.

But what about compared with green?

Likewise we may think of orange as a warm colour. Well, it’s much warmer than blue for sure.

But this is where colours can start becoming confusing, because they are also so psychologically subjective.

Some people feel that red is the warmest colour on the colour wheel, perhaps because of its strength and intensity.

Others argue that it is in the very midpoint of orange; that going either into the red or the yellow is cooling.

And others say that yellow is the warmest colour, but then others disagree because of its weaker tint.

People become confused because of the values of colours too; a darker red seems warmer than a lighter yellow.

We can argue about colour forever.

So this makes painting the halftones more interesting, because when colours are placed adjacent to each other, they ‘shift’ the way we see the form.

I also don’t want to get going on the whole “warm colours advance and cool colours recede” bus.

So the bottom line, is when mixing our halftones, we need to think about how our tones react with each other and not think of them as intrinsically warm or cool. It’s all relative.

If you look at this close up of Bouguereau’s The Wave, in which I boosted the saturation a little, you’ll see the shifts in hue of the halftones.

See how the warm orangey-pink of her fleshy cheeks, transition into violets and then blues towards her jaw line and neck, the cool blue of her temple, the reflected blue on her chin, the cooler violet in the occular area, and then the warm browns and oranges in the shadow beneath her eyebrows.

Take a look at one of Rembrandt’s portraits below:

In the examples above, I boosted the saturation to show off the hues of the halftones, and of course a digital screen can never substitute for seeing paintings in the flesh (stupid pun LOL).

But it’s generally a good idea to keep your halftones quite subtle and lower in saturation, i.e. more greyed.

It’s also usually easier to keep your halftones cooler too.

If your flesh colour is predominately orange, you can mix in a little blue to ‘neutralise’ it, i.e. grey it down and cool it. You can add a bit of green to your warm reds, violet to your yellow, and so on.

Because your halftones are cooler, the fleshier areas in the light will look relatively warmer and brighter in saturation.

In practice, though, I kind of made up a mixture of dirty pinks, olive greens, blue greys, and subtle violets.

And thought carefully about how the light fell over the form; where the warm and cool areas of the flesh would be, relative to the general direction of the light.

As well as the reflected light; and where the fleshier parts of the body would seem perhaps a bit warmer due to the blood beneath the surface of the skin.

And where the skin looks a bit cooler and thinner because of the bonier areas of the body.

My palette for painting the halftones

So it was a fairly limited palette, but this gave me a lot more control over the colour mixing and colour harmonies.

As you can see, I could easily get a nice arrangement of greys for the halftones. And adding a bit of white, immediately cooled the halftones down too.

You could use Flake White, which I particularly like for this, as it is more transparent than titanium white. But I was running a bit low on Flake white. And it doesn’t really matter, as I scumbled in quite thin layers for the halftones.

So the idea is subtlety. Painting with an arrangement of greyed colours (or tones) first, allows one to adjust the saturation with warm glazes in the shadows, and brighter flesh tones later on.

Amateur artists often over-exaggerate their values, especially in the halftones and in the light areas. So pay special attention to the halftones and keep the values quite subtle. See Tenaya Sims’ monochromatic painting tutorial.

It may help to take a black and white photo at this stage, to see how the tones are working, without the influence of colour.

You can also hold your switched-off cell phone at an angle and use it as a ‘black screen’. Check if the values are working this way, reflecting your painting in the screen.

By the way, if you watched the video, you’ll see I made anatomical diagrams of this particular pose.

This helps me understand the forms of the bones and muscles better. It helps even when painting from a live model ― being able to identify the forms ― but is especially important when working from a photo reference.

I think it’s important to be able to identify and understand what you’re painting, and not just copy blindly.

Thanks for reading, and check out the next video/blog post! I’ll start glazing the shadows and painting the skin tone. Time to bring some life into this figure painting!

Please let me know in the comments below if you need any help with these painting techniques, or if something confuses you. If you come across something interesting, please share! One should never stop learning.

Also, check out my Sirens series, which this painting I’m working on is a part of. 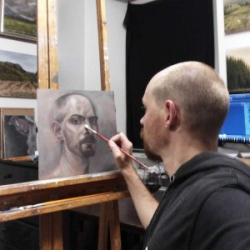 Damian Osborne
Damian Osborne is a fine artist from Cape Town, South Africa. Taking inspiration from the Old Master traditions, from nature, and from the people around him (especially his wife), he tries to push beyond the mediocre and aim for mastery in his paintings. 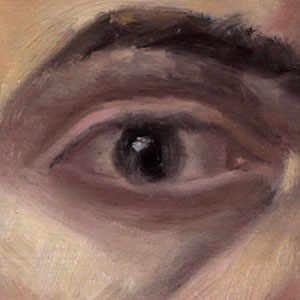 And I’m a contemporary figurative and landscape artist from South Africa.

Painting is fundamental to honouring this life and this reality. It’s communication with the unconscious and with Nature. Through art, I hope to subtly stir an internal shift in the way people connect to the land, themselves and this vast natural world; to invite introspection; to awaken a sense of belonging and appreciation.

• So if you want to learn some really interesting art techniques from the Old Masters;

• Or if you wanna know more about my art and weird ideas, workshops, exhibitions and art lessons;

• Or if you just want some inspiration as an artist — 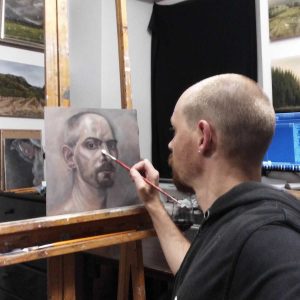 Through art, one transmits feelings. It unites us. Art is timeless and will never outlive its usefulness.

My aim is to begin an internal shift in the way people think of their connection to the natural world. To address this odd disconnect in ourselves.

And why does it feel like we’ve lost the art of being alone?

I try to capture other-worldliness and quiet poetry in landscapes and, hopefully, a sense of mystery and serenity in my figures.

I believe in creating extremely high-quality artwork that will last for generations. I believe in providing information and excellent and approachable service to collectors. I believe in daily practice and hard work to improve the quality and vision of my art.