Painting a Still Life of Apples 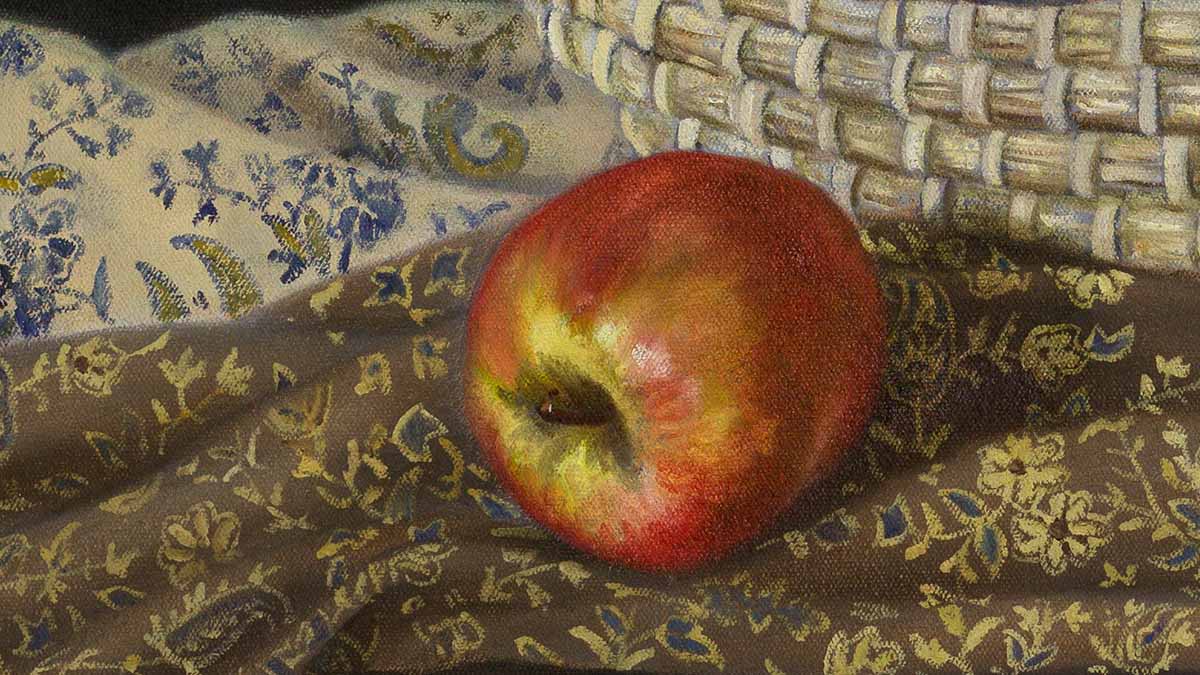 Painting a Still Life of Apples

I had a commission to paint a still life of apples for a collector, so I decided to share the process in a short blog.

I set up a rustic-looking grass bowl with pink lady apples and a pretty brown and blue pashmina on the table. Then I lit it with a spotlight to simplify the shadows but also made sure I could see the canvas I would be painting on.

It was better to paint it at night when the room was dark, but in the daytime, I hung blankets over the windows as makeshift curtains to block out the excess light.

I liked the composition of the setup, and the colours were quite simple too. The colour harmony is a triad of yellow, red and its complimentary, green.

The values were also deliberately simple. I knew I wanted a chiaroscuro effect, using a dark, greenish background, the complimentary of the main subject matter – red apples.

The mid to light values were mostly straw-coloured ochres which made up most the bowl and the floral design of the pashmina.

The foreground also compliments the background nicely. The table is a warm reddish-brown, while the background is a cool, dark greenish hue as I mentioned.

I basically broke the painting up into 5 stages:

I first began with a vine charcoal preparatory drawing on a canvas toned with a mix of burnt sienna, yellow ochre and white. The advantage of willow or vine charcoal, is that it wipes off easily if you make a mistake.

Doing the drawing helped me to quickly get the composition and the placement down onto the canvas.

Once I was happy with the drawing, I took a soft hake brush of fine hair, and brushed over the canvas, removing excess charcoal. It’s called ghosting. A feint drawing still remains on the canvas.

The next step was painting the grisaille (pronounced gree – zai). This is an underpainting in simply black and white, or greyscale. Gris means grey.

This helps a lot to simplify matters and not worry about colours yet. It helps to think about your values (lights and darks) and contrast.

It helps to work out your forms and your edges. Using the paint, you can decide on your sharp or soft edges to create a focal point and movement in the composition.

It was a useful stage for me, particularly in painting the drapery and building the folds. The grisaille helps to build the illusion of 3D space beyond the charcoal line drawing.

Oil paint becomes more transparent as it dries and over time, so even though I’ll paint right over the grisaille, it’s still useful to create an underpainting as it still affects the tones that will be placed on top of it.

The grisaille stage was dry in a couple of days, so I began with the following step:

This was the most difficult and time-consuming stage I thought. Working wet in wet, or in the direct painting method, I started adding the local colour over the grisaille.

I began from the back and worked to the foreground, beginning with painting the wickerwork of the basket, then the furthest apple to the nearest.

Then I painted the pashmina with its filigree and floral designs which took ages. But eventually I had this step completed.

During this stage, I painted in a slightly lighter key or value, because I knew that I was going to be glazing more colours in the next stage. So it’s usually better to paint things a little lighter I found. Then the colours will really vibrate with successive glazes on top.

I painted the background dark and slightly greenish, which compliments the bright red of the apples.

Once this stage was sufficiently dry (I give this stage a few extra days just to be sure), I started on the glazing.

Step 4 is my favourite step. All the hard work of getting the painting down in the direct method is done and now is the time that it starts coming alive. This is when the lighting adds depth and drama to the work.

Since I was only using one light source in my setup, it helped to create a simple and dramatic chiaroscuro lighting effect. The cast shadows were well defined and basic.

I mixed up some transparent colours on my palette with an oil painting medium I made up of 1/2 part genuine turps, 2 parts alkyd resin and 2 parts refined linseed oil.

I started off with the cast shadows of the bowl, mixing ultramarine blue, sap green, burnt umber and black. This made a dark, slight greenish, cool tone that resembles the general background and creates unity in the painting.

I then glazed some dioxazine rose and red over the reddish parts of the apples to make them a little brighter. And then I played with the warm and cool colour balance of reds and greens in my shadow mixture.

If you look at the glazed shadows, you’ll notice that I didn’t just make one mixture of colour and then glaze everything the same. I was cognisant of the local colour of the object, its complimentary and the surrounding overall colour of the painting, and I then pushed the shadows to either warmer or cooler in order to find balance.

Glazing is a wonderful effect because of the refracted colours that arise due to the transparent nature of oil paint, and these illuminating results can’t be created with simple wet in wet direct painting.

While defining the shadows of the folds of the drapery, I glazed the cast shadow of the apple in front of the bowl a little darker. This is a focal point in the painting and deserved the greatest contrast of values and sharpness of edges.

I also went over my highlights again, just to make them a little brighter.

I thought that after step 4, my painting was finished and I boldly went ahead and signed it. I wanted to include it in an exhibition I was having the next day.

But after the painting had dried and on closer study, I decided that it wasn’t creating the effect that I wanted. That’s why it’s important to sit with a painting for a few days before proclaiming it complete I think. It’s something I should try to do more often.

To me, the shadows lacked depth and the fruit lacked brightness. One must also be careful of making judgments in different lighting conditions. When the painting has a bright spotlight on it, the colours look vivid. But in a room with normal ambient lighting, I felt that the painting needed more oomph.

Once the glossiness of the glazing had dried, the depth of the shadows was a lot lighter than I anticipated. Sometimes when using a medium, the paint looks darker, brighter and ‘wetter’. As it dries however, it ‘sinks in’, so the artist must always compensate for this by having enough pigment to medium in the ratio.

I went over the shadows again, this time with a bit more colour in the mixture and using the same oil medium from step 4.

The effect was subtle, but I think the lighting in the painting looks a bit more defined now and the colours sing a little better.

To frame the painting, I cut the wooden mouldings to size on my framing guillotine and joined them with my underpinner.  I sanded down and filled any rough edges. Then gave the frame an acrylic undercoat of yellow ochre. I allowed it to dry properly over a day or two.

Then I mixed 1 part of blond shellac flakes with one part methylated spirits in a small glass jar, and let it settle overnight or left it in the sun for a few hours to dissolve. I saw recipes online saying mix 1 part shellac to four parts spirits, but this didn’t do it for me. It just wouldn’t get tacky enough. I figured the 4:1 mix is better for a varnish than for goldleafing.

Anyway, I applied goldleaf over the tacky shellac until the whole frame was done. There were bits where the leaf flaked off, but this just added to the ‘antique’ or ‘distressed look’.

Once the goldleaf had settled a bit, I brushed the shellac over the top to seal it.

Then the next day, I used a rag to rub the frame down and loosen any errant goldleaf skewings.

I then made up a mixture of raw umber, sap green, black and ultramarine blue oil paint on a palette, mixed with a bit of alkyd resin and linseed oil, and rubbed it into the frame with my fingers and used a rag to lift it off in certain areas.

I wanted to create a greenish gold antique looking frame to go with greenish colour palette of the painting – in places like the cast shadows, the dark background, and the greenish yellow colour on the apples.

So that’s it for now.

Thanks for reading and I hope you enjoyed this blog. Please don’t be shy to leave a comment or question below.

Check out my portraits and figure paintings here.

Art is about sharing..

4 thoughts on “Painting a Still Life of Apples” 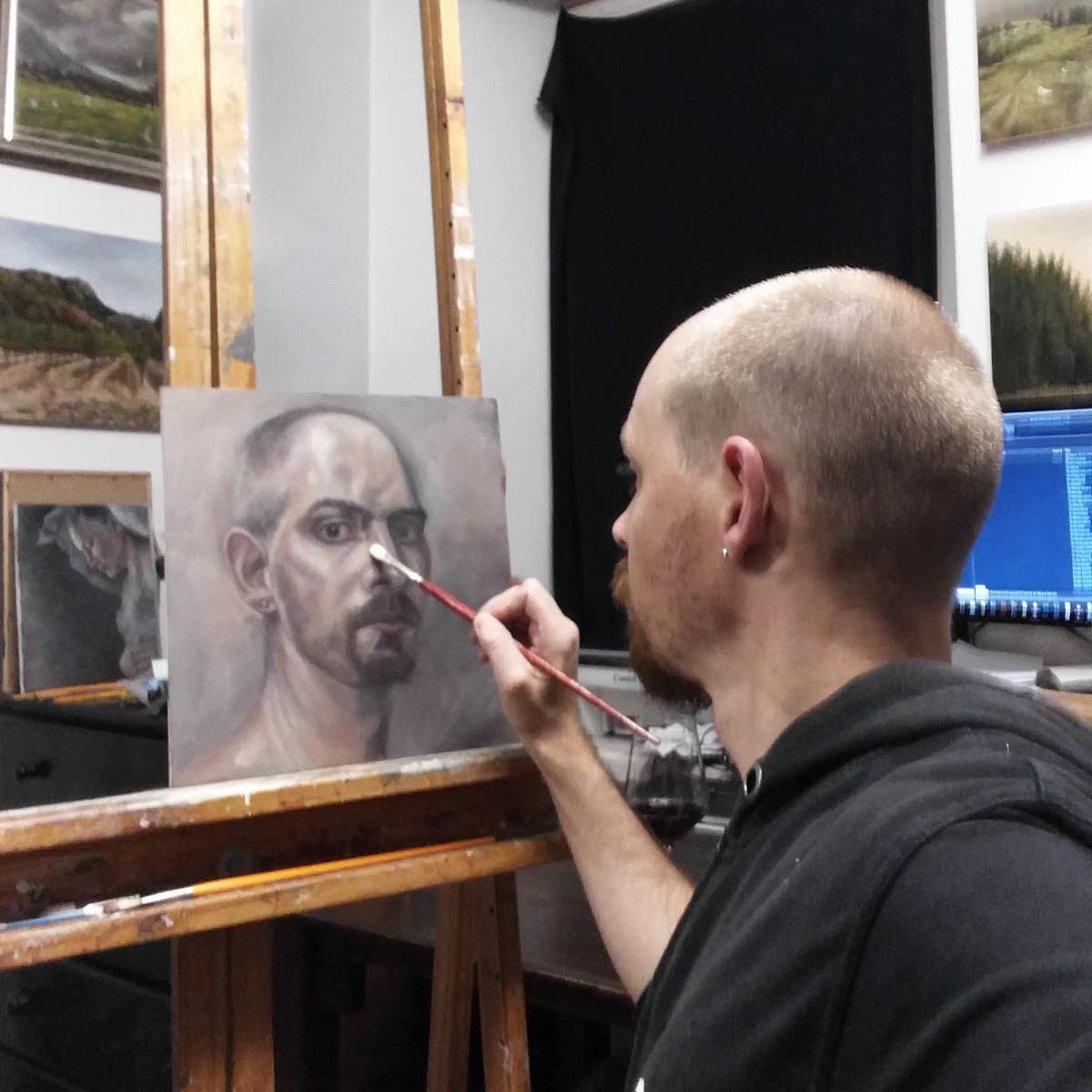 And I’m an artist from South Africa.

I paint because I want to begin an internal shift in the way people think of their connection to the land and this vast natural world. To invite introspection. To awaken a sense of belonging and appreciation.

So if you really are interested to learn more about my art and art techniques, workshops, exhibitions and art lessons, or just what’s inspiring me and where I’m heading artistically – if you want some personal stuff that may inspire you too – then sign up for my VIP art letter below.